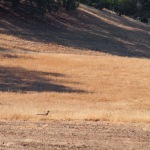 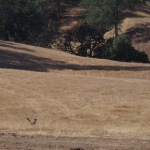 On my last visit to the land, I was graced with a sighting of a roadrunner. Mary had mentioned that she’d seen one on a regular basis, but I hadn’t yet spotted one, and wasn’t even sure I would know one if I had! The only roadrunner I could think of was the cartoon bird, which I know is not representative.

But, as I unloaded the car at the campsite, I saw a distinctive bird running along the ground and I immediately knew what it was.

Fun facts that I’ve since learned (mostly from Wikipedia):
– A group of roadrunners is called a “marathon” or a “race”
– They can fly, but can run much faster (over 20mph)
– They eat insects, fruit, seeds AND small reptiles and rodents (hunting larger snakes cooperatively!)
– Some Native American tribes believed the bird provided protection against evil spirits

One thought on “Roadrunner”

BuyTheFarm.org is a website and blog about our not-for-profit project to help city folks share a piece of farmland for both recreational and agricultural purposes, now getting started on 218 acres in Northern California's Capay Valley. We're just getting up and started, both online and on the farm, but feel free to click around and let us know what you think!