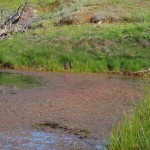 It’s always a learning process, isn’t it? When we first heard the bullfrogs croaking, we were thrilled! What a fun animal to find in the ponds. They’re big, they make distinct sounds, and there’s the possibility of catching them and eating them, too!

And there was the whole funny story of Molly trying to show them to me and I just. couldn’t. see. them.
“There!” she told me – “those bright green spots.”
Hmm, I thought, maybe she doesn’t know what a frog looks like?
“Let’s just sit here, really still and quiet, and maybe one will surface,” I told her.
Then, I used my super zoom lens and snapped a photo, used the camera screen to zoom in even further on “those bright green spots,” and … 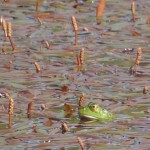 … it was a frog! Clear as day. Always listen to Molly.

Back home, I looked at the picture and decided to find out just what kind of frog it is. A quick internet search pretty clearly identified it as an American Bullfrog. Great! At least it’s not some exotic frog that’s going to eat all the native plants and animals!

Except that it is.

It turns out the American Bullfrog is, indeed, native to the US. Just not this part of the US, which is a big country, after all! According to some stories, the American Bullfrog was introduced to California to fill the appetites of settlers who were eating the native Red-legged Frog legs almost to extinction. Whether or not that’s true, it is true that the Bullfrog has become an invasive non-native and, for many reasons, is directly linked to the decline of the native Red-legged Frogs (and possibly others).

BuyTheFarm.org is a website and blog about our not-for-profit project to help city folks share a piece of farmland for both recreational and agricultural purposes, now getting started on 218 acres in Northern California's Capay Valley. We're just getting up and started, both online and on the farm, but feel free to click around and let us know what you think!